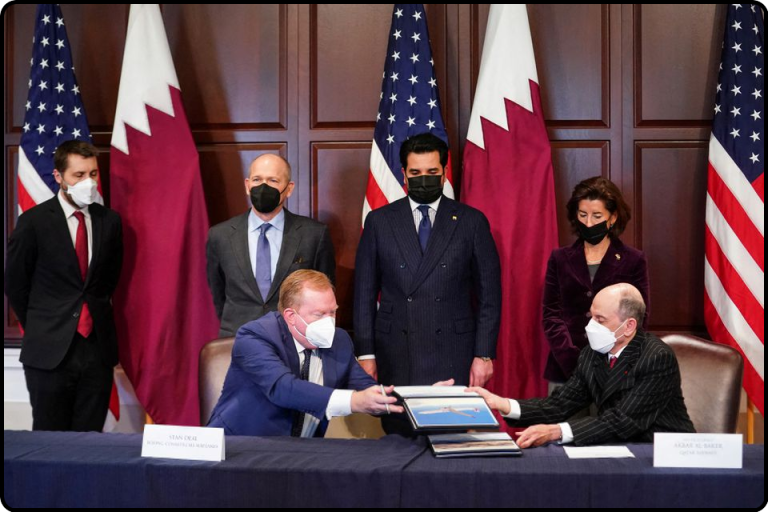 Boeing is signing a launch order from Qatar Airways in a Washington ceremony for a new freighter version 777X passenger jet. Earlier, the company was in advanced negotiations with Qatar for around 34 of the planned twin-engined freighters in an estimated deal worth $14 billion.

Qatar Airways made an official statement saying it is interested in buying 50 new-gen freighters with future top-up purchases within radar. It will also bridge new cargo version of 777X with a handful extra current generation 777 freighters.

A deal which will augment the development of new freighter will be signed at the White House. There are no official comments from Boeing or Qatar Airways.

The new advancements will make this freighter version the world’s largest twin-engined passenger plane. The development plan for freighter passenger version has been pushed for further for three years to late 2023, and may go ahead.

This deal brings a relief for Boeing from the impact of safety crisis over the 737 MAX and delay with 777X passenger version and 787 Dreamliner production problems.

Revenue from the Deal

Boeing benefits from this deal will depend on the discounts and how the freighters will be converted from the previous order for new version 777X passenger. Qatar is currently the second largest customer for world’s largest twin-engined jetliner that has 60 of the 406 seat 777X version on order. It is estimated that it could fall by third, which can be due to delays in design, and drop in near-term demand for passenger jets. Industry sources estimated the freighter order will be near to 15.