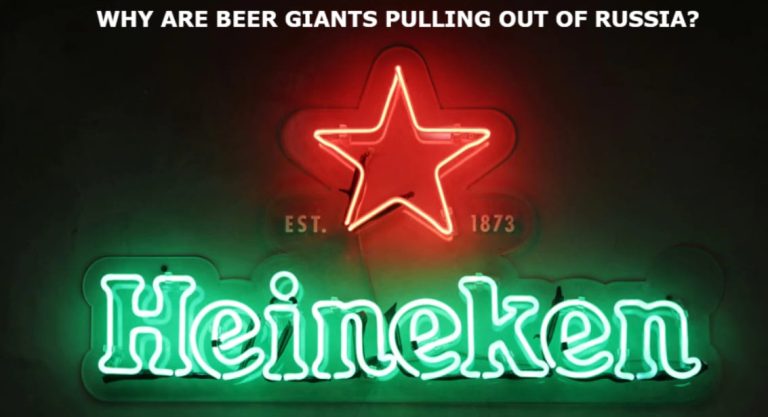 Why are Beer Giants Pulling out of Russia?

The Russian invasion of Ukraine has resulted in several giant companies pulling out of the Russian states. While tech giants condemned the war and stopped their operations in Russia, currently beer giants have also decided to show their solidarity toward Ukraine.

Recently, the Beer giants Carlsberg and Heineken are joining the fray of companies that are pulling out of Russia over its invasion of Ukraine. In a statement, the Netherlands brewery said its business in Russia is no longer sustainable nor viable in the current environment. It said it is seeking an orderly transfer of our business to a new owner in full compliance with international and local laws. The company had previously announced that it would stop new investments and exports to Russia and end the production, sale, and advertising of its brand. It also announced that it would not accept any financial benefits or profit from its business in Russia.

During a statement, Heineken said: “We aim for an orderly transfer of our business to a new owner in full compliance with international and local laws. To ensure the ongoing safety and wellbeing of our employees and to minimize the risk of nationalization, we concluded that we continue with the recently reduced operations during this transition period.” However, Heineken will continue paying its staff in Russia through the end of 2022. It also said that it won’t profit from the sale of its Russian operations and expects to take a $438 million euro charge as a result.

Hours after Heineken’s announcement, its Danish competitor Carlsberg said it would also be parting ways with Russia which, along with Ukraine, is one of its main markets in Central and Eastern Europe. In a statement, the Copenhagen-based group said it had taken “the difficult and immediate decision to seek a full disposal of our business in Russia, which we believe is the right thing to do in the current environment.”

The Danish brewer‘s CEO, Cees ‘t Hart, said the decision means Carlsberg will have no presence in Russia and the business in its vast Russian market will no longer be included in Carlsberg’s revenue and operating profit. The business will be treated as an asset held for sale until the completion of the disposal. Any profits generated during the humanitarian crisis will be donated to relief organizations, Carlsberg said. Earlier this month, Carlsberg said it was immediately stopping new investments and exports to Russia with ‘t Hart saying then that the stop also includes exports from other Carlsberg Group companies to Baltika Breweries.