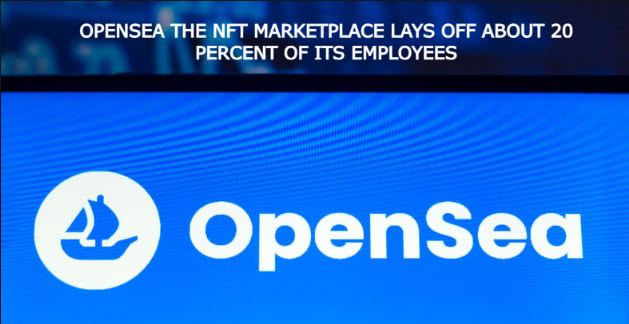 Giant NFT marketplace, OpenSea has decided to 20 percent of its employees. The announcement was made by OpenSea co-founder and CEO Devin Finzer. To the employees he said in a message, “Hi all, we made an incredibly sad and difficult decision to reduce the size of our team by ~20%, and today we’re saying goodbye to many of our friends and team members across OpenSea,” He also said, “I am so grateful to all those leaving OpenSea today, for their contributions and the time they spent with us on this journey. They have played an immeasurable role in, and will always be part of, the OpenSea story and community,” Vice reported that, “those laid off will receive “generous” severance, healthcare coverage into the new year, and “accelerated equity vesting for those who haven’t hit their cliff.”

The reason behind laying off

In the message by Finzer to the employees, he explained, “the reality is that we have entered an unprecedented combination of crypto winter and broad macroeconomic instability, and we need to prepare the company for the possibility of a prolonged downturn.”

According to The Verge, “in January celebrating Finzer and his co-founder Alex Atallah’s $2.2 billion net worth (each) said the company employed more than 70 people, but an OpenSea spokesperson tells The Verge that 230 people will remain with the company.” They added, “When we profiled OpenSea in February, the company had just received an additional $300 million in funding with a valuation of $13.3 billion and was the dominant player in selling the tokens, earning a 2.5 percent commission on trades.”

Recently the company is leading with some issues. According to The Verge they are,