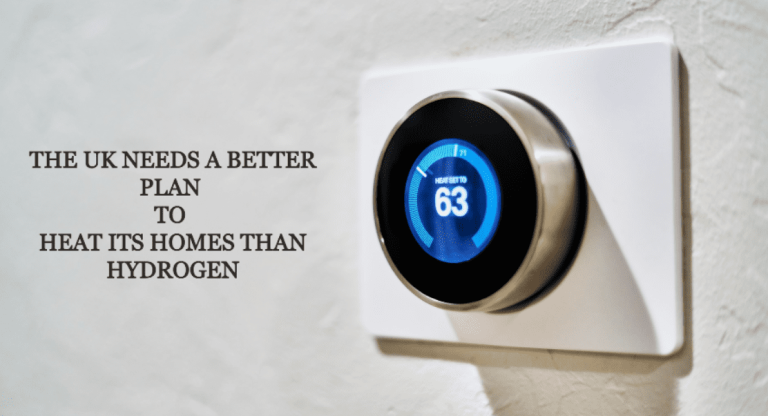 The case for heating homes with hydrogen rather than natural gas appears to be dead. In the UK, hydrogen has become an important part of the debate around decarbonizing home heating. 85 percent of all homes use natural gas to heat space and water, with the oil and gas industry pushing hydrogen as something that can leverage the existing gas pipelines. And lawmakers with close ties to the industry have claimed that hydrogen is a “silver bullet” to help the UK reach its climate targets.

According to a new study from the Regulatory Assistance Project, an NGO, such claims are a big pile of old nonsense. The project ran an extensive meta-analysis of research into hydrogen technology overall, finding that the promises of easy retrofit don’t add up. It said that it wasn’t clear if the existing infrastructure was actually suitable to take hydrogen without major adaptation. That was, after all, one of the major selling points of using hydrogen over switching to heat pumps and other low-carbon methods.

It’s something that Engadget already covered in its extensive report on the UK’s home heating situation back in 2021. The suitability of infrastructure is only one part of the problem, however, since many experts also asked where all of this hydrogen was coming from. Supplying the UK with enough hydrogen to heat 85 percent of its homes, without any work to reduce demand, would require around 10 million tons of hydrogen.

The Regulatory Assistance Project’s report also found that trying to use hydrogen for space and hot water heating is a waste of a vital material. Green hydrogen could be put to better use in agricultural processes, like making fertilizer or in heavy industry. And we’ve already seen that green hydrogen has a part to play in decarbonizing industrial transport, like shipping, and in the railways where mass-electrification isn’t viable.

In its conclusions, the report adds that greater emphasis on hydrogen will only serve to delay the take up of better technologies, like heat pumps. There’s a political dimension to this, too, with The Guardian reporting that hydrogen lobbyists were out in force at the recent Labour Party conference, and are expected to attend next week’s Conservative Party conference as well.

PreviousDynamic Island Expected to Expand to All iPhone 15 ModelsNextWhat is Green Technology and what are its benefits in 2022?