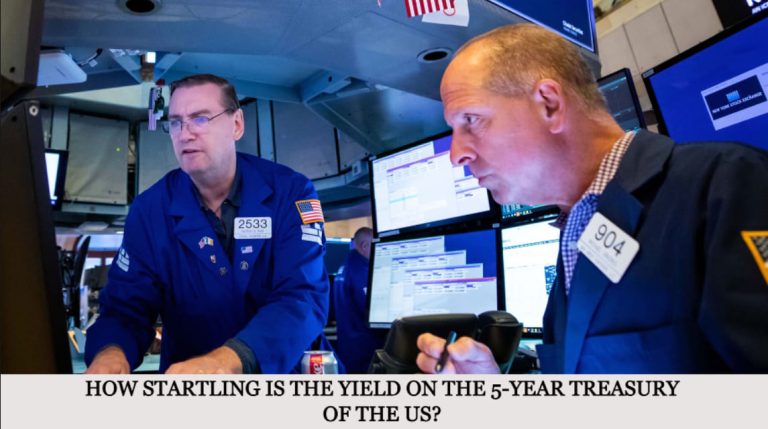 How startling is the yield on the 5-year Treasury of the US?

In a piece of recent news, the yield on the 5-year Treasury was mostly higher with investors keeping an eye on the spreads between bonds, after the 5-year and 30-year rates flipped at the start of the week.

Higher Yield on the  5-year Treasury

Yield curve inversions have historically occurred prior to recessions, though it is the spread between the 2-year and 10-year that is considered more important by traders. This spread effectively became flat on Tuesday, according to CNBC data, while other sources showed the curve briefly inverting.

Antoine Bouvet, senior rates strategist at ING added: “But clearly there’s a risk and that risk is increasing when you take into account the Fed committing almost to raise rates to restrictive territory, at a time when some quarters of the economy are showing signs of slowing down and clearly that is something that needs to be [on] investors’ minds.”

Sentiment was boosted on Tuesday following negotiations between Russia and Ukraine officials in Turkey, at which Russia’s deputy defense minister claimed Moscow had decided to “drastically” cut back its military activity near Ukraine’s capital. Russia had begun to move some of its troops away from the city of Kyiv to elsewhere in Ukraine, but Pentagon Press Secretary John Kirby warned on Tuesday that these movements do not amount to a retreat.

In addition to monitoring developments in this geopolitical crisis, economic data updates also remain in focus for investors. Payroll services firm ADP is due to release its March employment change report at 8:15 a.m. ET on Wednesday. The final fourth-quarter reading of U.S. gross domestic product is set to be released at 8:30 a.m. ET. An auction is scheduled to be held on Wednesday for $30 billion of 119-day bills.